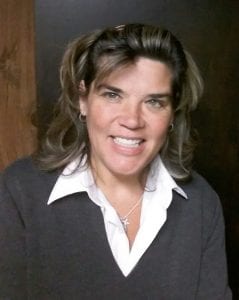 After receiving a Bachelor of Arts in English, Bonnie Lee decided to become a paralegal. Twenty years later, the courtroom was like a second home to her. At the urging of a friend, she entered a court reporting program and earned an associate degree in applied science. Four years as a court reporter led her to pursue additional education.

“I was speaking with one of my instructors who was telling me about voice reporting,” she says. “My instructor said you have a lot of the credits you can use right over into voice, so then I went into voice school and finished that fairly quickly.” Today, Lee teaches voice reporting at Brown College of Court Reporting.

Lee did not have an easy time with the traditional court reporting program that uses stenography, but her struggling was what influenced her decision to teach. “I did really well in voice; I just naturally talk fast,” she remembers. “I always felt as though I could offer something to the students who get frustrated, who get disgusted and who get down on themselves.” Voice reporting requires writing at speeds of 225 words per minute (needed for graduation), and she remembers how difficult that can be. “It’s hard when you’re always seeing people pass tests, and there you are at 140 [words per minute], 160. You can’t go to that jury challenge or that Q&A.”

Lee’s strong suit is understanding, but she’s also somewhat of a cheerleader. “I think there are days that all students can use that,” she says. “I mean, there’s the tough love aspect, too, where you have to get on them to learn the skills.” It’s worth it, she says. “I love when I get students back in speed building after they’ve started off in theory with me. They come back three quarters later, and they’re at 140 or 160 or they’re already at graduation speed.” Other times, students who have graduated get in touch to say they’re working and just want to touch base. 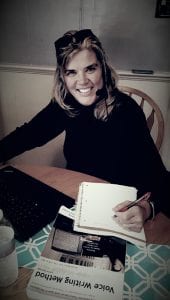 Staying focused enough to write accurately – “finding your zone” – is a major challenge for voice reporters. “You should be able to dictate at a speed of maybe 180, 200, 225 and probably not even know what you just dictated for that 20 or 25 minutes,” Lee explains. “Once you can tap into that zone, your best voice writers don’t think about what they’re doing; they just know that their mouths and ears do the job, and it just takes over.”

Imagine that you’re a voice reporter in a courtroom. You sit down and set up your equipment. People are likely to give you funny looks when they see the mask you wear and may even ask you what it is and how it works. That can’t affect you. “You’re no longer Mary or John; you become the court reporter. You lose any type of facial expression, any type of emotion, and you find a focal point that you can stick with that nobody can penetrate,” she says. “When you’re done with that job and you shut that computer down at the end of the day, then you come back to the reality of who you are.”

“I always say around week seven or eight, students find that “aha” moment where they say now it’s starting to make sense,” Lee says. That’s understandable because there’s a lot to learn. Both types of court reporting use a different language that relies on phonetics to record the dialogue that goes on in the courtroom. “When you started getting involved – especially in [traditional court reporting] – there’s a lot of syllables removed from our words when we stroke them, so it’s kind of like breaking down what you hear,” Lee says. “It’s not about how correct your spelling is as you’re stroking it or dictating it; you’re going to stroke out exactly what you hear.” With voice reporting, voice codes are shortcuts used to save time. “When you’re writing 225 words a minute you don’t always have that option or that opportunity to say everything they’re saying as they’re saying it.” 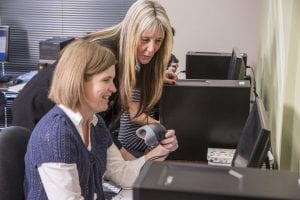 Brown students are also taught to focus on hyperliteracy – expanding their vocabulary and becoming familiar with world events. “This opens their ears up to a lot of words or a lot of language that we may not hear every day,” she says. “You may have an astronaut [in court] someday. You may have a nautical engineer, and they’re going to throw out terms that you may not know.”

For anyone considering becoming a voice reporter, Bonnie Lee has some advice. “If you’re going to dedicate yourself to this program and you’re going to dedicate the time, the money, then practice is the only thing that’s going to get you through,” she says. “I always try to tell my theory students especially the harder you work now, the quicker you’ll be making money later.”

Court reporting can be quite lucrative. According to the Bureau of Labor Statistics, the 2017 median pay for court reporters was $55,120 annually. Lee says court reporting is a “hotbed” – especially in the South. “They cannot produce voice writers fast enough.” Your comprehensive program at Brown College is designed to prepare you to sit for the state certification exam. If you pass, you will be eligible for an entry-level court reporting position.

Does court reporting sound like the job for you? Find out more about how Brown College of Court Reporting can prepare you for an exciting career as a court reporter.