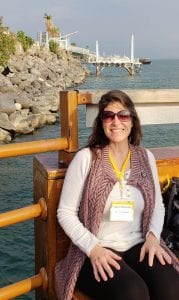 Instead of working in the military, Broome found jobs that allowed her to use and gain clerical and office skills.  She eventually became an executive assistant to a regional vice president of the restaurant chain, O’Charley’s.  By the end of 2009, Broome wanted to change her career to one that allowed her to keep learning and growing.  Recalling the aptitude test she took when she wanted to enter the Air Force, she decided to make the switch to court reporting.

For Broome, there was only one choice of court reporting school — Brown College of Court Reporting — and she started classes full-time in the voice writing method in January 2010.“I’d never heard of voice writing,” Broome says.  “My husband said, ‘they’re going to pay you to talk?!’” And that joke began her push to excellence.  She began in the second semester the method was ever taught at Brown.  “It was more about proving I could take a software in its infancy and master it,” she says. Broome’s competitive personality pushed her to excel in her studies.  “I was competing against my kids to make better grades than them, and I was competing against my husband because he joked about me talking so much,” Broome says.

Though it was challenging, Broome enjoyed her time at Brown.  “I thought it was fantastic,” she says.  “It was very challenging.  I was the nerd person who studied.  It was really hard, but I worked my behind off.  Failure wasn’t an option.” Being an adult also helped her enjoy it.  “I wasn’t 18, so I loved it.  At 42, I thought, ‘This is all I have to do?’ I loved it,” she says.  She credits Brown’s instructors not only for what they taught her in classes like English proofreading, court reporting procedures, and voice writing itself, but also for teaching her how to succeed once she graduated. 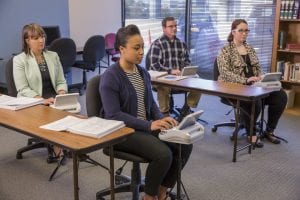 “I just did what they said.  You need to dress professional, be punctual, and produce an accurate and timely transcript, and I just did that.  They were very good at realistic expectations,” Broome says.  “They required us to shadow a seasoned reporter and take down what the reporter did, which I did a lot.  And although they only required the first 40 pages of a transcript to be completed for those shadowing hours, I would do the entire day’s work knowing that in my future, I would have to produce an entire transcript, and not just the first 40 pages.  They said that I would really need to find mentors, which I did and was very blessed to have help me.  They encouraged us to always ask questions and to join and become active in the state and national associations.”

She found a mentor when she attended the National Verbatim Reporters Association (NVRA) National Convention in the summer of 2010 in South Carolina.  At the convention she met Linda Drake.  She also took, and came within a few points of passing, their real-time court reporting test.  Broome’s impressive test result weren’t lost on Drake.

After graduating in June of 2011, Broome found work transcribing depositions and filling in at all but the federal level of Georgia courts.  She called Drake for help with transcripts. “Linda Drake was the first person who helped my career after graduation by giving me a box of transcript covers and helpful hints on putting my first transcript together,” Broome says.  This wouldn’t be the last time Drake helped her out.  At the end of 2012, she transitioned to close captioning full-time.  She started her own business, CMB Reporting Services, offering closed captioning and communication access real-time translation (CART) services.

Flash forward to April 2014, when Broome got a call from an Italian gentleman who asked if she wanted to provide her closed captioning services to His Holiness, the Pope. “I about fainted and did a lot of praying and practicing,” Broome says.  Drake had recommended her to caption the beautification ceremony of John Paul II and John XXIII. “They remotely installed Italian software and translated it into English so I could use it.  I was up on Sunday morning from 2 a.m. to 9 a.m. because of the time difference.  I was captioning for 2.3 billion people, and that is a number that I am so glad they told me after the fact,” she says.  “But truly, I would’ve never gotten the job if I had never gone to the South Carolina national convention in 2010 and met Linda Drake.”

Broome has had other mentors in her career, including Maxyne and Richard Bursky, whose work she proofread for a year and a half, and Heidi Thomas, who she shadowed for a year to learn CART/captioning.  She credits that mentorship with being excellent in her career today.  “The wisdom they provided was invaluable,” she said.

Broome enjoys the variety of organizations and events she captions, including government, the United Nations, national and international business, colleges, churches and guest speakers.  Each has its own nuances.  “It’s the hardest job you’ll ever love,” Broome says.  “Every day is challenging.  Every day is a chance to learn something new.” She also likes her job because she’s helping people who are deaf and hard of hearing, and she has the added flexibility of working from the comfort of her home in Newnan, Georgia.  “Working at home allowed me to take care of my late father before he passed,” Broome says.

When she’s not working, Broome enjoys gardening, riding on the back of her husband’s motorcycle and mentoring other court reporters.  She also served as the vice president of NVRA from 2017 to 2018, and was president of the Georgia Certified Court Reporters Association from 2013 to 2016. 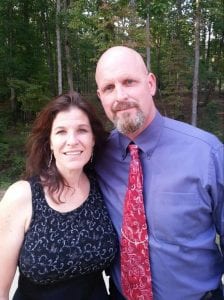 Broome’s advice for current and prospective court reporting students is to join state and national court reporting associations and listen to people when they have advice to offer. “I cannot emphasize enough that if it weren’t for the people I met, I wouldn’t be where I am,” she says.  “They know what they’re saying for a reason.  If someone offers you wisdom, you should take the wisdom.  You can’t buy wisdom.”

Trying your hardest is also important to succeeding in the industry, Broome advises.  “Try your best and network like crazy,” she says.  “You don’t know who you don’t know and how that might make all the difference.”

Caryn Broome changed her career and her life by trying her hardest as a student at Brown College of Court Reporting.  With Brown’s on-campus and online options, so can you, whether you live in the Atlanta area or elsewhere.  Learn more about Brown’s programs or get in touch with an admissions representative by logging on to www.bccr.edu.