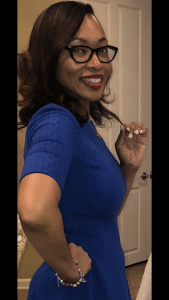 Traci Riney was a stay-at-home mom of three. She saw a commercial on TV one day that featured a lady in court who was holding a mask to her face. Riney was curious about what she was doing – which appeared to be work – so she contacted the advertiser, Brown College of Court Reporting. The lady on TV was a voice writer, a type of court reporter. Riney was fascinated and decided to learn more.

“I always wanted to be in the courtroom,” Riney said, but she knew going to law school was probably not realistic for her. Instead, she enrolled in Brown College’s court reporting program. In a little more than three years of training and an externship, Riney had become a court reporter.

A 2015 Brown College graduate, Riney began her career in the Atlanta Superior Court as a floater. “I would cover for different court reporters,” she says, “in criminal and civil cases.” After a year, someone in the Superior Court suggested that she would be a good fit for an open position for the official court reporter in juvenile court. Riney says it’s not often that a beginning court reporter can snag a job like the one she has. Floating helped her make connections she needed. “I have my own judge,” Riney says. “What I like most is that I have a home – the same judge every day. I like the stability … and the money.”

“I love it,” she says of her work. However, there are challenges. “The biggest challenge, I would say, is having to balance being in court and having to produce transcripts.” As much as she enjoys hearing the cases – some are really interesting – she says it can be very emotional. “A lot of cases are hard to hear,” she says, “and for some [court reporters], it could be personal. You need to think about that.”

Brown College has been preparing students for careers in court reporting for more than 46years. Riney says, “I would recommend Brown College because the professors are amazing.” She went to college before attending Brown, but she says, “You learn a plethora of information going to Brown.” When beginning court reporters shadow her, Riney says she can instantly tell which ones have had the benefit of a Brown College education.

“I always knew I wanted to be in the courtroom,” Riney says. “Once I started to cover in court, I knew that’s what I wanted to do. I’m where I want to be.”

Court reporting, either the stenographic or voice writing methods, can be quite lucrative. According to the Bureau of Labor Statistics, the 2017 median pay for court reporters was $55,120 annually. At Brown College of Court Reporting, you can “talk” your way into a new career by studying the in-demand voice writing method. You speak into a mask-like device that has a built-in microphone, transferring your speech into a laptop computer equipped with voice recognition and translation software. This permits you to transcribe the court proceedings with your voice rather than by typing.

If you prefer, you can enroll in the stenography court reporting program that uses a computer, CAT software and stenotype machine to capture a verbatim record of proceedings in a special shorthand-type language. When you graduate, you are likely to be transcribing 225 words per minute with 95 percent accuracy.

Brown College is currently the only National Court Reporters Association (NCRA)-certified court reporting program in Georgia. With small class sizes (averaging 8 to 12 students), you have more personalized instruction and can forge better relationships than in schools where you’re just a number. In addition, Brown College offers flexible full- and part-time class schedules, as well as online learning opportunities, to fit the demands of your lifestyle.

Your comprehensive program at Brown College is designed to prepare you for the demands of working in a real courtroom. Instructors range from Ivy League graduates to attorneys and successful court reporters who have industry knowledge and experience that they can share with you. You can choose either to complete a certificate program or pursue an Associate of Applied Science (AAS) degree. Once you’ve completed your training, you will be qualified to sit for the national certification exam. If you pass, you will be eligible for an entry-level court reporting position and will join an elite group of Brown College graduates.

Find out more about how Brown College of Court Reporting can prepare you for an exciting career as a court reporter.