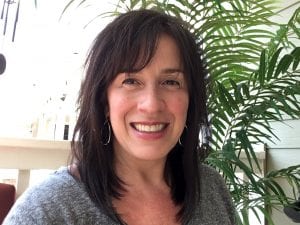 Beebe Farrell’s youngest child was eight when Beebe decided to go back to school. When she was younger, Farrell had wanted to be an attorney, but decided it would take too much effort at her age (in her late 40s). The next best thing, she thought, was court reporting. She chose to enroll at Brown College of Court Reporting in Atlanta.

With three kids and a husband whose company was opening a new office in Australia, Farrell needed to complete her studies exclusively as an online student. She needed to be home with the kids while her husband was out of the country. “I pushed myself to try to take on as much as I possibly could because I had that flexibility,” Farrell says. “You have to be very disciplined and self-motivated. Otherwise, it’s easy to become disenchanted with it.” Farrell was able to complete the program in two years.

Today, Beebe Farrell is a freelance court reporter who is loving every minute of her job. She had initially thought she wanted to work in a courthouse for one particular judge, but she says it isn’t normal to get that type of job right off the bat. “I was hired by an agency that I where I was completing an externship, and they’ve been awesome,” she says. “When I started, I found that I might go on a deposition for like two hours and my day is mine, whereas if you go to court you’re there all day. I thought [freelancing] was a better deal for me with the kids. It’s nice that I have that flexibility to work around their schedules.”

Brown College of Court Reporting teaches two kinds of court reporting: traditional stenography that uses a stenotype machine special typewriter and voice writing. Farrell is a voice writer. “I’m using my voice and speaking into a mask. We use voice codes,” she says. Voice writers create shortcuts for formatting as they’re dictating. “You might do, like for ‘beyond a reasonable doubt,’ I would just say ‘broubt,’” she explains. 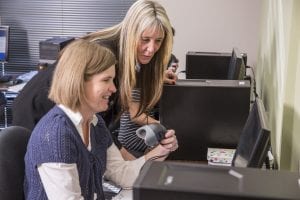 Voice writing involves more than just talking into a mask. She has a computer in front of her programmed with software that integrates with a voice recognition system. As the trial progresses, she speaks, trailing behind those speaking in the courtroom, and dictates, putting in punctuation as she goes. “It’s fascinating,” she says. “Then you look at it and make corrections because we have to make sure that the record is clear and clean because our name goes on it.” Farrell says she can also edit while talking via her computer.

As comfortable as she is doing voice writing now, Farrell says the job – and even her training at Brown – have challenges. Being at home, closed off and separate from the other students, was difficult. “I so didn’t want to fail,” she recalls. “With the voice writing, I thought, ‘How easy is that? I can talk, and I’m good at it,’ but there are utterances and learning codes.” She missed the camaraderie and also experienced testing anxiety. “Everybody was passing, and I kept failing,” she says. “I got really discouraged, but when you’re online you don’t have that student next to you to give you that hug.”

For Farrell, the scariest thing about her job was doing the oath in the courtroom. “I don’t know how many times I had to say, ‘could you please raise your right hand?’ I would go blank. It’s that moment when all eyes are on you. You don’t want to be noticed.” Another issue is having to complete the transcripts as quickly as possible and make sure that the grammar is correct.

“I’m surprised that I’m making the money that I am this early on,” she says. According to Farrell, there’s a shortage of court reporters, and she could work more if she were able to produce the transcripts as quickly as she gets the requests for work. “I love it, and the best part is that I get to be like the fly on the wall and hear everything,” she says. “Some of it’s more interesting than other stuff; it’s very diverse in terms of the things I’m exposed to.”

There are other options for voice writers besides working in the courtroom. “You could go into doing closed captioning, provide services to someone who’s hearing impaired,” she says, “or even taking notes during a town meeting. It’s definitely not boring.” 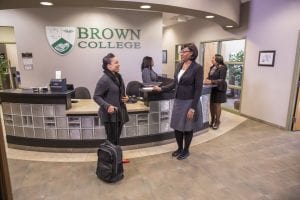 “Brown is awesome,” says Farrell, who would recommend it to those considering a career as a court reporter. “I love the fact that they genuinely feel happy for my achievements.” The instructors were also very supportive. “They were great in encouraging me,” she says. Some were even open to giving her their personal phone numbers and email addresses if she needed help. “Periodically, some would even call and check up on me.”

Beebe Farrell has been working for only a few months, but she enjoys the support she’s received from the court community. “I love every moment that I’ve worked,” she says. “One day I’m on the 42nd floor of some high-rise in downtown Atlanta, and the next day I might be in somebody’s living room doing a deposition or at a church doing a town meeting. It’s really diverse, which keeps it very interesting.”

The best part of all? “I love the fact that I was able to be an example for my children and show them that it’s never too late to go after what you want.”

If you think court reporting is in your future, get the training you need at Brown College of Court Reporting, the only National Court Reporters Association (NCRA)-certified court reporting program in Georgia. Brown College offers flexible full- and part-time class schedules, small class sizes (averaging 8 to 12 students), and both on-campus and online learning opportunities to fit the demands of your lifestyle.